Sixty percent of the world’s railways run on a standard gauge of 1435mm in width.

This gauge width originated from England in the 1820’s; was subsequently introduced to the USA in 1881, and then was eventually adopted by other countries. China started to build its railroads in 1876 using this gauge. However, Imperial Russia on the other hand, began building its railroad in 1840 with a 1525mm gauge. This figure was then shortened a bit to 1520 mm, by a law of the Soviet Union, in 1960. Today, the Russian gauge is used in all former Soviet Union countries, former Soviet Satellite countries, Mongolia, and Finland.

The difference between the two gauges is only 85mm. Yet this little distinction holds an enormous political, social and economical significance for Mongolia’s future. Mongolia will soon be making a historic choice in deciding the size of their gauge width. We have three options: accept the Russian gauge, accept the Chinese gauge or build both.

Option 1: 1520
Mongolia is one of a few countries whose ownership of major infrastructure is shared with the government of another country. The railroad running down Mongolia from north to south is property of Ulaanbaatar Railways, which is a Russian and Mongolian joint venture, equally shared by the two governments. Since the price for railway services has been constantly rising during the last sixty years under rigid transportation and insurance amendments, the ownership monopoly of this sector has been the highest operational cost item of all Mongolian businesses. Ulaanbaatar Railways has never issued a transparent operation report and the Russian government does not allow third party auditing.
In spite of Russia’s questionable policies and ethics in this sector, our new president has signed a memorandum to further develop railway infrastructure based on the 1520mm gauge. And Prime Minister Bayar has established another joint venture with the Russian government called “Infrastructure Development”. This company is owned 50% by Russian railways, 25% by Mongolian railways and 25% by Erdenes MGL, a Mongolian state company. Taking into account Russia’s real influence on Mongolian railways, Russia controls this new company de-facto.
The advantage of continuing the development of Mongolian railway infrastructure based on the Russian gauge is that we can complete the Sainshand – Dalanzadgad connection relatively fast and we can begin the extract-process/export scenario. So far, the Tavan Tolgoi project is being delayed. The initial plan of extracting coal and exporting it, then with that revenue, creating processing facilities and power stations, will require a much higher initial investment.

The disadvantage of the 1520mm option is that we will become completely dependent on the Russian and Mongolian government for management. Governments have never been excellent managers, particularly these two. The transportation prices will still be high for Mongolian businesses. Mongolia will not have a direct connection with the Chinese railroad and our competitiveness will depend on transloading goods at the break-point facilities in Ereen and Zamiin Uud.

Option 2: 1435
Energy Resource: A Mongolian company was granted permission by the Mongolian government to build railroads with the international gauge (1435 mm). They have already made the design and have started the project. In theory, there must be a special tender announced for having infrastructure built by a private company. Secondly, in principle, the builder of the infrastructure should never be the end-user of the project. Our government is not “aware” of this. Pretending to look confused, the government mocks its citizens instead.
This 260 km of railroad across the Chinese border will replace the current transportation method of trucking raw coal on dirt roads. This railroad will go through Oyu Tolgoi and other key mineral deposit areas. If this road gets completed first, there will be less interest to transport minerals to Sainshand for further processing. Even though they will try to process it themselves, this is an extract-export option.

Option 3: 1435+1520
If Dalanzadgad and Sainshand are connected with the standard (1435mm) or dual gauges (a combination of both, or four lines, like at the border between Finland-Sweden), we have a chance to directly connect with both our neighbors with their own gauges. If we can create transloading facilities in Sainshand, we will have created a value. Services will be charged and there will be a demand for creating new railway lines with the Chinese gauge to the southern border.

We will then have two lines accessing the ocean without having to change the wheels, and two lines accessing Kazakhstan. The northern line of the Mongolian network will run on the Russian gauge, while the southern line will be run on the Chinese gauge. Eventually, we will need to create a second transloading facility in the western part of the country someday. So thus, Sainshand - Choir will be connected by the Russian gauge as it was specified in the above mentioned memorandum.

This might be a unique chance for Mongolia to become a player in a big geopolitical game.

It is my hope that this column inspires discussion among Mongolian citizens on this historic decision, for our representatives to make the best choice among the three options. If we do not discuss this issue as we did the constitution of Mongolia, the people, in whose hands the power really is, might soon present us with another surprise “gift.”
Posted by Jargalsaikhan Dambadarjaa (Jargal) at 10:14 AM 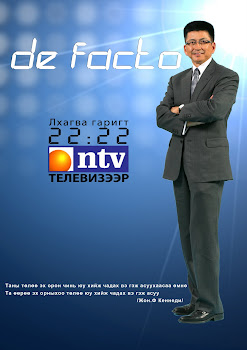